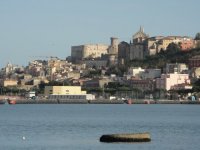 About half-way between Rome and Naples, just at the edge of the Italian region of Lazio, lies the seaside city of Gaeta. Gaeta is situated in a dramatic bay, reminding visitors of a miniature Bay of Naples. The Orlando Mountain rises just behind it.

An important seaport, Gaeta has a long and rich history, spanning back to Ancient Rome. Its medieval center is stunning and well-preserved, with its imposing Arogonese castle, winding streets, pretty bell towers and churches. Gaeta is also the site of a NATO Naval base. 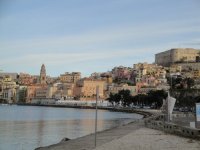 For lovers of the classics, according to Virgil, Gaeta was named after Caieta – wet nurse to the hero Aeneas. She is said to have been buried here.

A walk around the winding streets of the medieval quarter is an enjoyable way to view the pretty architecture and views.

There are surprises around every corner, like this lovely 12th century bell tower.

The fish market is a must-visit destination. It’s set just across the street from the bay where the fishing boats return with the day’s catch. Wander the stalls – many open late into the evening – this in itself might be the highlight of a trip to Gaeta.

Close to Naples, Gaeta is also a good place to buy the excellent mozzarella di bufala, mozzarella made with milk from the water buffalo from the neighboring region of Campania and the calorie-laden, mouth-watering Neapolitan desserts. 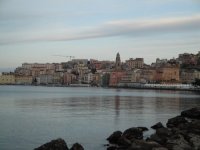 Shops abound in the winding streets of the “new town” near the port and the fish market.

Gaeta can be easily combined with the beautiful seaside town of Sperlonga. Sperlonga is just a short distance north and, if you are staying there, Gaeta would be a great place to spend an afternoon and evening, eating dinner at one of the town’s many seafood restaurants located just along the bay.

7 thoughts on “Gaeta: A Bay of Naples in miniature”