On a recent trip to Brussels with my younger son, we took advantage of the spectacular spring weather to make a day trip to a Flemish city I’d never visited – Gent in Flemish, Gand in French.

I’ve always been curious about this small city, and have seen many photos of its picturesque architecture and canals, so it was a real treat to see it in person.

On the April day when we visited, Gent was packed with tourists lounging in the bright sunshine. According to the locals, it had been a long, grey winter, so the first spring sunshine was appreciated by all. 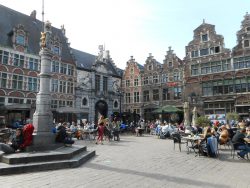 Gent is less well-known than the heavily visited Bruges (see my earlier post on biking in Bruges), but it is equally picturesque.

Like Bruges, Gent owes its spectacular architecture to its period of great wealth in textile trade during the medieval period and stretching into Holland’s Golden Period of trade in the 16th century.

The Leie River was an important riverway for trade and Gent served as an important trade port, especially between the 13th and 14th centuries – and you can still see much of the impressively preserved architecture from that time.

Gent was founded in the 9th century by the first count of Flanders, who erected a castle that served as protection for the town against Viking invasions.

Gent prospered spectacularly until the 17th century, when the Dutch closed an estuary of the Scheldt  River flowing to Antwerp, a decision that would lead to the decline of both Antwerp and Gent.

In the 18th and 19th century, Gent would become an important industrial center, leading to pollution of its river and a decline of its architecture and its aesthetic appeal, but an impressive renovation project starting in the 1980s returned this medieval city to its earlier splendor.

There’s much to admire in beautiful Gent and art lovers (like me) should not miss the spectacular Jan van Eyck triptych, completed in 1432. You can admire it in the impressive Gothic Saint Baafskathedraal.

For us, Gent was a stop on a day trip that included Bruges, but this charming city deserves a longer visit next time.

Don’t miss out on a visit to Gent next time you’re in Belgium – and wishing you the sunny views we enjoyed on our brief stay in this charming medieval town.