I pass the Auditorium Mecenate on a daily basis.

For years, I’ve been curious to visit the site of ancient Roman banquets and concerts, but it is rarely open to the public. The structure above ground is enclosed by a gate, a sign announces that tours can sometimes be arranged through a central office.

So it’s not a surprise I was eager to go one Saturday evening in May when, as part of the annual Notte nei musei (Night in the Museums) event held in Rome, it was open to the public for a concert. 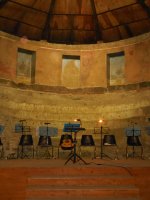 For one euro per ticket, you could see the Auditorium Mecenate and see a concert of mandolins and guitars.

The Auditorium Mecenate was actually a ninfeo, ‘a place of water’  usually possessing a fountain or a source of water, and often surrounded by gardens.

After the death of Maecenas (Mecenate), in 8 B.C., the villa was annexed to imperial properties and given to Emperor Tiberius. It was in this phase that frescoes were added, unfortunately there are only traces of them now in the niches.

Mecenate was supposed to have been very wealthy and, as a generous patron of the arts, he was said to be very fond of having parties, banquets, and cultural gatherings in his ninfeo.  Both Virgil and Horace read their poetry to audiences here. Mecenate provided Horace with full financial support, in addition to allowing him to live in one of his villas in the Sabine Hills outside of Rome. The word “Maecenas”, meaning cultural benefactor, comes from this patron of the arts.

The site was forgotten for many years, and only rediscovered in excavations of 1874.  Nineteenth century archaeological sleuths identified this site for excavations from writings of Horace documenting the location of the Auditoriom Mecenate.

And so, this location made a fitting locale for a cultural evening. I was excited to finally see the impressive space, and to listen to a mandolin concert at a site where Ancient Romans once listened to Virgil recite his poetry.

And my children? Exhausted from a long Saturday of tennis and soccer competitions, they – err…uh… –  failed to appreciated the mandolin music in such lofty surroundings. They both fell asleep in my lap. Luckily, Horace and Virgil weren’t on hand to reprimand them…