The town of Plovidov is located in southern Bulgaria, along the Maritza River, just a two-hour drive from the capital Sofia.

When we were in Sofia this spring (see my earlier posts about the Boyana church and the Pod lipite restaurant), we were looking at various trips from the capital. What struck us most were the obscene prices charged for organized bus trips – best to avoid those ‘special offers’ proposed by your hotel.

We decided instead to go to the Sofia bus station and take advantage of the frequent public buses – running almost hourly – going back and forth between Sofia and Plovdiv (about 15 euro, round-trip). 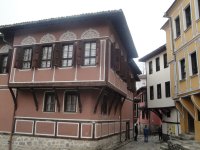 The one difficulty for tourists is that many ticket counter workers speak only Bulgarian, but go knowing the Cyrillic for Sofia and Plovdiv, and you’ll manage just fine.

Plovdiv enjoys a long history. It was settled by the Thracians in the 5th century BC, and it was captured by Philip of Macedon (father of Alexander the Great) in 342 BC. Successive invaders saw the Romans, the Huns, the Slavs and the Ottomans passing through, settling,  and leaving their mark on the city.

Here are some of the highlights:

Roman Stadium: No ancient Roman town was complete without its arena. Plovdiv’s was built in the 2nd century AD, when the town was under Roman rule.

Originally, the stadium could fit 30000 spectators, but only a small portion remains now. Still, it’s been well-preserved and it’s worth climbing down to see the stadium from below. 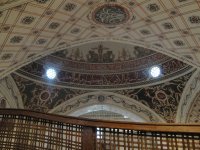 Dzhumaya Mosque: This beautiful mosque is just across the street from the Roman Stadium. It is said to be built in 1364.

The imam gave us a tour around the mosque, for a small fee arranged before. Head scarves were available for female visitors.

The interior is beautifully decorated, and we were allowed to climb up to the Pasha’s balcony.

Roman Theatre: This marble theatre, quite well-preserved, was only discovered in 1972.

It was built in the second century AD, and today is still used for concerts and theatre performances.

The Icon Museum: This tiny but interesting museum is located in Plovdiv’s Old Town. Bulgaria’s predominant religion is Orthodox, and a visit to the many interesting churches uncovers beautiful icons. But the icon Museum – open daily Monday-Saturday 9 am-5:30 pm) is well worth a visit for its collection of historical icons that were taken from local churches when they were under threat during the years of Communism.

Nebet Tepe: Nebet Tepe means Prayer Hill. This is the highest point of town, containing the remnants of the citadel.

The foundations of the citadel are barely visible now, but it’s easy to see what an excellent vantage point this was.

It’s worth a climb up here to get a birds-eye overview over the town, including views to the Maritsa River below.

Kuyumdzhiogh House: An excellent example of National Revival architecture, this home was built in 1847. It now houses an Ethnographic Museum, with explanations in Bulgarian and English. It’s well worth a visit to this museum, for an overview of Bulgarian history and traditions.

There are interesting displays about traditional Bulgarian costumes, music, traditions, furniture, and industry – including a traditional rose-oil distiller. Rose oil production is still an important industry today. Bulgaria produces about seventy percent of the world’s rose oil. The historical photos are fascinating and our children enjoyed being able to experiment with playing the cowbells.

National Revival architecture: Aside from the Kuyumdzhiogh House, many of the traditional homes in the Old Town are open to the public as small museums showing how their inhabitants once lived.

The National Revival style gained popularity in the mid-nineteenth century. Many were built for the town’s wealth merchants, and their bright colors, elaborate decorations, and opulent interiors.

Built under the period of Ottoman rule, these homes reflect the aesthetic tastes of Ottoman architecture, and skillfully blend European and Oriental styles. Leave plenty of time to explore these wonderful cobblestones streets with their beautiful, whimsical National Revival homes.

There’s lots to see on your visit to beautiful Plovdiv, so slow down and take plenty of time to wander these picturesque streets.

Unfortunately, I discovered this blog after my visit, but if you’re travelling to Bulgaria, be sure to take a look at this blog, Bulgaria Now, written by a French ex-pat living in Bulgaria, and filled with lots of useful tips and information.